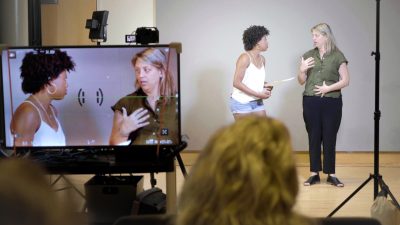 Acting and directing students team up to produce films in just three weeks.

It’s the second day of Maymester, Carolina’s three-week offering of some 50 Summer School courses. Students in two of them, Acting for the Camera and Directing for the Camera, occupy a studio filled with bodies pretending to move large objects across the room, without using their hands, and making sounds like Mrummph! Bahfff! And Arrrrh!

The students in the studio come from both of these classes in the dramatic art department, part of the College of Arts & Sciences. Through this joint exercise, they learn a common vocabulary for describing movement in acting — “press” versus “dab,” for example. For the moment, all the students are producing are grunts and groans, but by the end of Maymester they will have made three short films to show at a screening.

Because of Maymester’s condensed schedule, they have less than 40 hours of class time to complete the final projects. That’s 12 classes, each three hours and 15 minutes long. Attendance and attention are vital.

“We can’t teach everything about filmmaking in 12 classes,” says the directing instructor, assistant professor Tracy Bersley. “We want them to get their hands dirty and to wrestle with how to frame a shot, how to tell a story through camera angles, nonverbal storytelling and verbal storytelling, as well as script writing.”

The collaboration between the acting class and directing class, and sometimes a script writing class, has been a staple of Maymester since 2013. The classes meet separately at times to hone their particular crafts, but often join forces to learn common lessons, like today’s on movement, and to collaborate on their projects.

The students vary widely in backgrounds and reasons for taking the courses. A psychology major wants to delve into characters’ minds. A varsity soccer player wants “an understanding of a world I don’t really know.” A continuing education student wants to “re-invigorate a sense of craft.”

They and the others represent how today’s story-driven culture brings in students who differ in imagination and creativity, says Aubrey Snowden, the teaching assistant professor leading the acting class.

In today’s noisy class, Snowden takes notes for her students’ use as they learn about how movement can be used to develop their characters.

The actors also learn about their voice and body through physical and vocal warm-ups each class, discuss the theory and purpose of performance, study plays such as “The Glass Menagerie” from the actor’s point of view and perform contemporary monologues and commercial scripts for the camera. In addition to the final-project films, the acting students collaborate with directing students on commercials, iPhone films and storyboards.

Snowden, who also teaches courses on directing and script-analysis and directs graduate and undergraduate productions, asks students to work under her personal tenets of theater: generosity, curiosity and a tolerance of uncertainty.

Generosity, she explains, includes giving feedback to others, and receiving their feedback, in a caring way. Curiosity is essential for actors, who need to bring “your full self to a character” because “acting is more about revealing than putting something on,” Snowden says. The tolerance of uncertainty applies to the final project, which might be great or not so great. “Who cares? It’s feeling the fear, removing the inner critic and doing it anyway.”

After the joint exercise, Bersley takes the fledgling directors to a separate session in the studio next door. There Bersley, who is also head of movement for the master of fine arts acting program and choreographer for PlayMakers Repertory Company, will describe the six directing tools they will try: theme, story, character, intention, space and previous circumstance. The tools emphasize structuring a story to create rising action, climax and resolution and using space to support the story’s themes.

The directors will also need to work with actors, as they learn how to use a character’s actions to prove their intention. The instructors say that they are impressed with the way students collaborate and share their ideas to make them more expansive, more detailed.

But the experience is intense for all the students. “There’s a healthy sense of panic. It’s thrilling to watch them push so hard to make something that they’re proud of and different from theater,” Bersley said.

When the two classes finish their work together, the final-project films are shown at a screening for class members and guests on the course’s last day.

“Film is captured forever,” Bersley says. “If they want to go into this field, they’ll have a record of what they produced. It’s practical in a business sense as well, and they have this beautiful thing that can be celebrated in the end.”